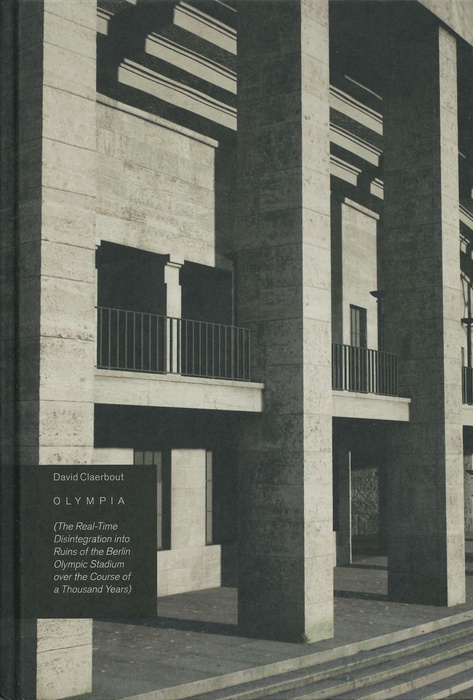 This publication documents the first iteration of Belgian artist David Claerbout’s project Olympia, a digital simulation of the Olympic Stadium in Berlin. Conceived to last one thousand years, Claerbout’s simulation uses real-time weather data to present the slow decay of the stadium over the coming millennium. Projected onto monumental screens in the Boiler House at the KINDL – Centre for Contemporary Art in Berlin from late summer 2016 to spring 2017, Olympia aims to exceed the human ability to imagine time, thus radically surpassing our own experience of the world.

Juxtaposing human temporality with ideological and technical time, Claerbout’s point of departure is the stadium of the 1936 Olympics, built by Nazi architect Albert Speer, which the artist has painstakingly digitally rendered, and whose history is recounted in this catalogue. The work makes reference to the “Thousand-Year Reich”—a concept adopted by the Nazis—and the crude ideas of Speer, who called for architecture, as a symbol of empire, to be designed with its future ruins in mind.

The slow disintegration of architecture does not fit within our time horizon, yet this richly illustrated publication—complete with time stamped screenshots and installation views of the project, as well as reflections by Knut Ebeling, Andreas Fiedler, and the artist—reveals what is perceptible to us in real time.